Miranda heads to the gym and, after a fuchsia-face-inducing workout, decides it's perhaps not quite for her. She must therefore find a way of getting out of her water-tight contract with the gym.
Preview clip 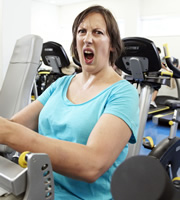 With increasing amounts of pressure from her mother, Penny to get a "proper job", and PR queen Tilly's new promotion, Miranda decides it's high time to turn herself into a "career bitch". When an interview for sales manager at a local department store comes up, Miranda decides that, with her retail experience and people skills, she's the perfect candidate for the job. Despite her alarming propensity to sing in interviews and address random questions to "Sir Alan", she manages to impress.

Like all good career girls, Miranda heads to the gym and, after a fuchsia-face-inducing workout, she decides it's perhaps not quite for her. In a desperate attempt to break her water-tight contract with the gym, Miranda threatens to usher in a mass of dirty dogs and sheep in protest - with little success.

Later, Miranda's hapless attempts at waitressing in Gary's restaurant not only embarrass her furious mother but also mean that Tilly's celebratory promotion drinks are in danger of being more fiasco than fiesta.

Miranda at the Gym

Miranda is trying to find out a way of her water-tight contract with the gym.