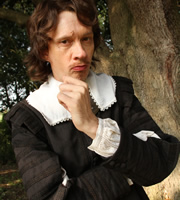 Oliver Cromwell rises from obscurity, challenges King Charles I in the English Civil War, and ultimately orders the King's execution - as he says, a it was a 'cruel necessity'. In other parts of Britain there are a bunch of oddly named Puritan soldiers, and the great writers Shakespeare and Milton square up for a word battle.