Series two concludes as crisis strikes on opening night of Doll and Em's off-Broadway play. Will they be able to save the production? 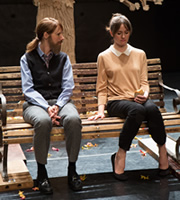 It's an exciting time for the girls as opening night of their off-Broadway play arrives, along with their supportive mothers from the UK.

Behind the scenes, however, tensions are running high as the play's stars, Olivia Wilde and Evan Rachel Wood, reach the end of their tethers. Fed up with the constant script changes, not to mention Emily's offensive comments about Olivia that Dolly emailed to the actresses, the Hollywood duo abandon the production moments before curtain-up.

With a full house waiting in anticipation, Doll and Em have little choice but to take to the stage themselves. But will they be able to pull it off?