On set, Em's anxiety about her performance grows when she's distracted by a co-star. 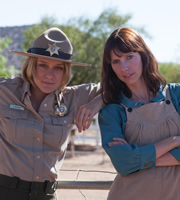 Following Doll's accident, Em plays the role of star and assistant, looking after her pal as well as driving herself to work and fetching her own coffee - none of which comes naturally to her.

On set, Em's anxiety about her performance grows when she's distracted by co-star Chloë Sevigny's concern for Doll's injury and director Mike's apparent disappointment in her portrayal. And things only get worse when the actress loses her cool with her friend in front of the cast and crew.

The final blow in Em's terrible day comes courtesy of a phone call from her agent, who asks to speak to Doll: the former waitress has been asked to audition for the role Em is dying to land.