Em fears her career may be over while Doll is presented with the opportunity of a lifetime. 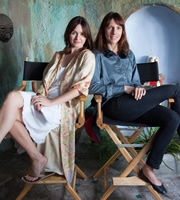 The tables are turning in the penultimate episode of the series, as Em fears her career may be over while Doll is presented with the opportunity of a lifetime.

With production on Em's film coming to an end and no news from her recent audition, she worries she'll never get another job. Doll, though, gets a callback and must fly to London for a screen test, although she's scared to share the news with her friend.

Unaware of Doll's plans, Em tries to help her out one last time and arranges for her to meet an actor friend who is looking for an assistant. However, as the pair prepares to leave their LA apartment, the truth about Doll's callback comes out, along with some brutal home truths about exactly how difficult she's found working for Em, leaving their relationship in tatters.