Both girls are back in London. Doll's second audition amounts to nothing so she returns to her old waitressing job. 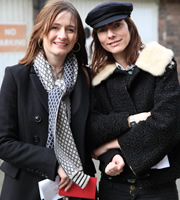 Both girls are back in London. When Doll's second audition for the role Em believes she stole from her amounts to nothing, the fledgling actress returns to her old waitressing job as well as performing with an amateur theatre company.

Em, meanwhile, is visiting the capital with her family and, eager to relive happy memories of her childhood, leads everyone to her favourite restaurant - the same one Doll is working in. With the tension between the two palpable, the restaurant manager slips a flyer for Doll's play into Em's takeaway bag.

Deciding to attend, Em is touched by her friend's performance and finally sees her creativity as a talent, not a threat. In a bid to mend their relationship, she approaches Doll with a gesture intended to prove the depth of their friendship, hoping it isn't too late to build bridges.