New comedy series about female friendship between a Hollywood star and the lifetime best friend she hires to be her PA.
Preview clip 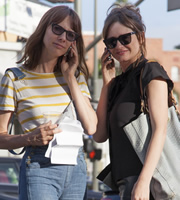 Doll is unhappy with her obsessive-compulsive boyfriend and seeks solace in the arms of best friend and Hollywood actress, Em. Though the years have found the girls living halfway across the world from one another, their bond is strong enough to allow Doll to gravitate toward Em in a time of need. Em adores her friend so much that she's willing to leave a red carpet interview to take her call.

Soon, Doll has arrived in Los Angeles but as Em calms her friend, she is called back to the set by a PA - Em is the lead in an upcoming crime film. After a rather awkward welcome by a non-English speaking housemaid, Doll settles into Em's spacious home as her new personal assistant, which, Em claims, is merely just a title.

The next morning, however, proves her wrong and it becomes apparent that American roads aren't the only thing Doll has to adapt to.

The first scene from the sitcom.