The director casts Doll as an extra in the big scene. She manages to steal the spotlight from Em. 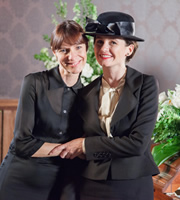 Em is nervous about filming an upcoming scene in which her character says goodbye to her dying father and having Doll around doesn't make things easier. While crew members dismiss the actress as demanding and moody, everyone loves Doll, a fellow victim of a leading lady's caprice. She's so charming, in fact, the director casts her as an extra in the big scene where she manages to steal the spotlight from Em.

There is good news on the horizon, however: a casting opportunity for Em. Relieved, she sends Doll out on a coffee run, which culminated in her pal injuring leg in an accident. With Doll now sporting a brace and crutches, Em becomes her assistant for the evening and is painfully aware that the tables are turning.