Squirrelled away in a lighthouse retreat, Doll and Em work on a Broadway play for them to also star in.
Preview clip 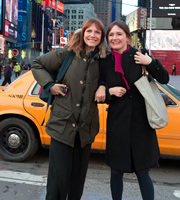 Real-life best friends Emily Mortimer and Dolly Wells return with a second instalment of their bittersweet self-penned comedy that offers an honest and satirical take on the joy and pain of female friendship.

Following the ups and down they experienced in Series 1 when Hollywood actress Em hired bestie Doll as her PA, the duo's relationship is now back on an even keel as they embark on a writing project together...

Squirrelled away in a lighthouse retreat, Doll and Em work on a Broadway play for them to also star in. But on returning to New York, they're soon dealt a reality check when a meeting with a big-name producer doesn't quite go as planned.

Quickly bouncing back, they decide to produce and direct the play themselves, turning to Doll's old flame Buddy for help in a finding a theatre to house their project.

As everything starts to fall into place, could Em's potential new movie hinder the play before it even gets off the ground?

Best friends Dolly Wells and Emily Mortimer return for Series 2 of their bittersweet self-penned comedy as they try to get their Broadway play off the ground.