While Dolly worries about Ewan McGregor's lack of contact, Em is also let down by the actor and finds herself able to focus on her play with Doll once again. 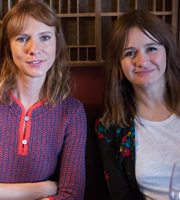 Following Doll's run-in with Ewan McGregor, she begins to obsess over the actor when she doesn't hear from him again.

Em, however, does have contact with the star when he calls her to reveals he's pulling out of their movie.

As the film's financing quickly follows Ewan out of the door, Em suddenly finds herself able to fully commit to their play once again. Shame neither her nor Dolly really know what they're doing with it.

But when Emily has a chance encounter in the street, she becomes inspired to change their production as opening night looms.