A chance encounter with Ewan McGregor takes Dolly by surprise, while Emily lands a film role that could threaten the future of her off-Broadway play with Doll.
Preview clip 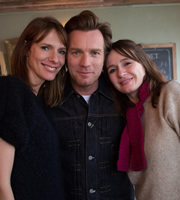 As rehearsals for their off-Broadway play starring Olivia Wilde and Evan Rachel Wood continue, Dolly and Emily become baffled by the girls' interpretation that the characters, based on Doll and Em, share more than a platonic relationship.

And as Emily grows concerned about the reflection of her family in the play, Olivia pays her an unexpected late-night call to do extra research into her role.

Elsewhere, a night out with Buddy leads Doll to a chance encounter with a very enthusiastic Ewan McGregor. Discussing their mutual love of writing, the pair soon share much more than passing interests, helping to persuade Doll that New York might not be so bad after all.

But positive thinking doesn't last for long when Emily is offered a film role that will take her away from the play. Tensions mount between the friends as Dolly prepares to take the reins of their project while Emily struggles to relinquish control.

Doll talks to Ewan McGregor in a bar.