Doll and Em attend a cast party for the latter's latest project. 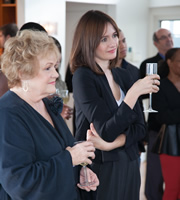 The duo attend a cast party for Em's latest project, thrown by its producer Buddy.

Among the guests are the film's director Mike, his girlfriend Susan and Em's co-star Chloë Sevigny.

While Em is off schmoozing, Doll is stuck babysitting Susan's son, with her good intentions to entertain the boy ending in disaster.

As she prepares to leave, Doll bumps into Buddy and he invites her and Em to try out his hot tub. Aware that this is a romantic opportunity for her friend, Em proposes a code word for when she should leave the two alone. But the evening doesn't quite go as planned as Buddy flirts with both girls, certainly not caring as to who swallows the bait.

Pleased by the attention she's getting, Em ignores Doll's signals and, irritated by Em's provocative behaviour, Doll leaves her and Buddy alone.