Martin has new neighbours: Erica the new art teacher at Portwenn school has moved in with her daughter, Bernie. 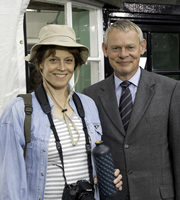 After Martin and Louisa tell Dr Timoney about their failed date night, she questions their ultimate compatibility. She asks them if it is time they recognise that perhaps they are not meant to be together: something for them to go and think about.

Martin has new neighbours: Erica the new art teacher at Portwenn school has moved in with her daughter, Bernie. Though Louisa is happy to finally have found a permanent teacher, this proves to be short-lived when Erica wants to try out some rather alternative ideas on the children.

PC Penhale manages to protect everyone after a car accident outside the school, and Louisa is very surprised when the victim of the crash turns out to be Dr Timoney.

Penhale is happy to finally have his crime stopping talents recognised, but is confused when he is offered a transfer to Exeter, particularly as this will mean leaving Janice behind, even though he hasn't quite managed to ask her out yet.

Martin discovers that his new neighbour is both noisy and rather accident prone, and thinks nothing of calling on the doctor next door.

Bert, his whisky dream now in tatters, decides to go back to something he knows, and becomes a handyman. But even this doesn't really prove worthwhile, when his first customer, Erica, has an accident, and he has to call Martin in to help.

Louisa and Martin are intrigued when Dr Timoney invites them for an additional therapy session - she might just have worked out an answer to the question of their relationship. And an American tourist seeks help from the Doc.