Martin and Louisa do not seem to be having much success with their therapy, so Dr Timoney advises that they should try and take things back to the beginning of their relationship and plan a date. 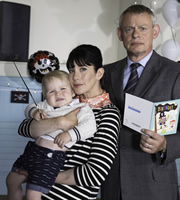 Martin and Louisa don't seem to be having much success with their therapy, so Dr Timoney advises that they should try and take things back to the beginning of their relationship, and plan a date, and try not to let their busy lives get in the way, even though Louisa is also trying to plan James Henry's first birthday party.

A last minute request from Danny, Louisa's ex-boyfriend, brings him and seven children from London camping on Ruth's farm, supervised by Al and Bert, but they need some children from a local school to show them around: Louisa feels she has to help her old friend out, even though this further adds to her load.
Martin is not at all pleased when Danny proceeds to try and intervene in their troubled relationship.

Things are going slightly better for Mrs Tishell and Clive, though Clive worries that he will not be able to keep up, when Mrs. Tishell invites him back into the bedroom, with disastrous consequences.

Things don't start off too badly for Martin and Louisa at the restaurant, but when Danny calls saying one of his children, Jake, has gone missing, date night is effectively over. When they finally find Jake, they also find Bert's whisky still, and PC Penhale is keen to lay down the law to Bert.

Martin and Louisa are left wondering if anything will ever go right for them, when Martin uncovers a health scare at James's party, that makes all the guests leave very quickly: not even Ruth's birthday cake can keep them there.