Martin reaches breaking point with being followed around by Buddy: He resolves to find a vet to have him put him down. 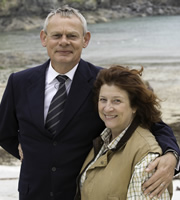 Martin resolves to find a vet to have Buddy put down.

Morwenna, and eventually Louisa, manage to persuade him that it isn't quite that simple - a vet will not put down a healthy dog just on Martin's say so. They intervene and find a new home for Buddy, with Angela Sim, a local vet, though Martin will have to take him there himself. Martin is not impressed by Angela's alternative approaches to medicine, even if it is veterinary medicine, but at least he has managed to offload Buddy onto her.

Meanwhile, Ruth finds out what Bert has been up to, in trying to make his own whisky, and he eventually persuades her to keep his secret.

Clive Tishell is suspicious of Mrs Tishell and who she might be cooking meals for, but decides to give her the benefit of the doubt so that they can really give their marriage another go.

PC Penhale wants to ask Janice out, but only succeeds in asking her to a barbecue at his place, and then has to persuade Al and Morwenna to come too, to make up the numbers.

Louisa and Martin's therapy homework results in a picnic, much to Martin's dismay, but even this doesn't go to plan, when they are interrupted by Angela and Buddy on the beach: Angela appears to be hallucinating, and Martin has to get Penhale to help him calm her down, so that he can treat her and find out what has been going on.

Newcomer to Portwenn, Debbie Sharrock, asks the Doc for a repeat prescription for her daughter Kelly. The doc refuses until he has been able to see Kelly's notes and make his own diagnosis.