Martin has decided he will be the one to move out of the surgery to allow Louisa the space she needs, which Louisa does really appreciate. 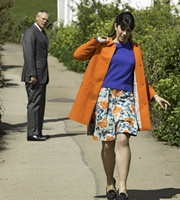 Louisa is intrigued to meet Martin's therapist, Dr Rachel Timoney, but is not quite so happy when Rachel suggests that they should have therapy as a couple, instead of Martin having it on his own. Aunt Ruth, however, manages to persuade Louisa that being a part of it will allow her a chance to defend herself - if she needs to.

Janice's babysitting of James Henry does not get off to the best of starts, but fortunately PC Penhale is around to help her out.

After his disastrous lobster special evening, Bert disappears, and his son Al is very concerned when Ruth tells him about Bert's behaviour, and when he finds out there are bailiffs at the restaurant.

Mrs Tishell is concerned that Martin will not be able to look after himself living on his own, so decides that she is the best person to help him.

The new Portwenn Radio DJ, Melanie, is trying to revitalise the station with a healthy eating week segment, and tries to get Martin involved. But she ends up getting more than she bargained for when Martin has to perform an operation live on the air.