Blackadder's latest plan to escape the terror of the trenches is to join the glamorous world of Lord Flasheart in the Royal Flying Corps. 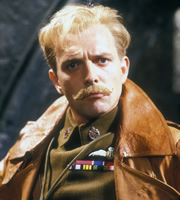 Blackadder joins the Royal Flying Corps in order to escape the trenches.

Unfortunately, on his maiden flight as a "20-minuter", Blackadder - with navigator Baldrick at his side - is shot-down behind German lines, and captured by their number 1 flying ace, Baron Von Richthoven.

Lord Flasheart battles the Red Baron in order to rescue them.