The time has finally come to go "over the top" and face the dreaded Hun on the battlefield. George is thrilled by the prospect, but Blackadder is still less than enthusiastic and resolves to call in an old trick and a long-standing favour owed to him by Field Marshal Haig...
Preview clip 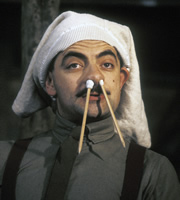 Edmund and Lt. Barleigh share a nice rat stroganoff in their dugout when word arrives that tomorrow morning the troops are going "over the top". Could a feigned bout of insanity put Edmund on the road to Calais?

This episode was produced without closing credits. Consequently, we have assumed the crew to be the same as in the rest of this series.

The moving final scenes of Blackadder Goes Forth. As Captain Blackadder and his comrades prepare to go 'over the top' to meet certain death, the show's rapid gag rate slows... and then stops.