The Black Adder, Episode 1 - The Foretelling

Arriving late for the Battle of Bosworth Field, Edmund Plantagenet, the Duke of Edinburgh, mistakenly beheads his uncle, King Richard III. With his father now King, the weasley Prince re-christens himself 'The Black Adder'... 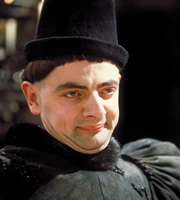 Edmund mistakenly kills King Richard III, making his own father king. But he is also responsible for the escape of his father's greatest enemy, Henry Tudor.

This episode was billed as "The first of six horrible situation tragedies to celebrate the 500th anniversary of the accession of Richard III."