It's New Year's Eve 1999 and Lord Edmund Blackadder V is holding a dinner party for his four closest friends. 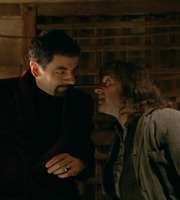 When a practical joke goes wrong and a 'time machine' constructed by Baldrick actually works, Edmund finds himself face-to-face with such historical luminaries as Elizabeth I, Robin Hood, William Shakespeare, and even a dinosaur.

This special episode was commissioned to be shown as a visitor attraction at The Millennium Dome, in a cinema venue run/sponsored by Sky. It was broadcast on Sky One in October, and received its first terrestrial broadcast on BBC One, on Sunday 21st April 2002 - for this a laughter track was added. (It had been due to air on Easter Sunday, at the end of March, but was postponed following the death of the Queen Mother.)