With a bit of trickery and abuse of George's sole talent, Blackadder has himself appointed Official War Artist and hopes to be sent to Paris accordingly; however, Field Marshal Haig's plans don't quite tally with the Captain's expectations... 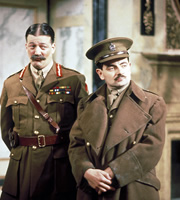 In the trenches on the front, Edmund vows that he's damned if he's doomed. When Field Marshal Haig unveils his new strategy to move his drinks cabinet nearer to Berlin, Blackadder volunteers to be Official War Artist.