The Black Adder, Episode 2 - Born To Be King

Having left Harry as ruling Prince Regent, King Richard is away killing Turks. Edmund is instructed to arrange entertainment for the upcoming feast of St Leonard's Day, and in the process believes he has found letters pertaining to his brother's legitimacy... 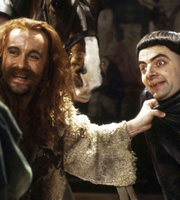 With the King off to the Crusades, Edmund attempts to discredit Prince Harry's claim to be next in line for the crown. He and Baldrick nearly succeed in casting doubt on his own legitimacy instead.

This episode was originally shown out of order, as episode 4. However, as the series is chronological, this was noticeable and it was broadcast 2nd in repeats, and issued as episode 2 on video and DVD since. We have reflected this intended 'correct' order rather than the initial broadcast.