With the Germans aware of every one of the British army's moves before they've even made them, General Melchett tracks the source to a spy in the nearby hospital. Blackadder is called upon to root out the Kraut snoop and bring him to justice. 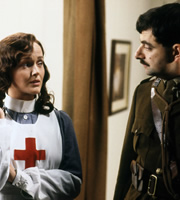 Edmund is given three weeks to find a spy in the hospital. He takes this as an opportunity to get on with the lovely Nurse Mary and to spend the better portion of those weeks in bed.