Melchett instructs Blackadder to organise a concert party in order to raise the troops' morale, following the Russians' withdrawal from combat. However, the General takes a particular liking to George's drag act, which could put a halt to proceedings... 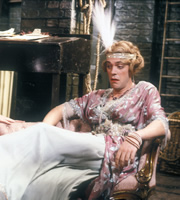 Bad news reaches the trenches. The October Revolution in Moscow has produced three appalling results: a cease-fire by Russia, an offensive by Germany and a Charlie Chaplin impression by Baldrick.