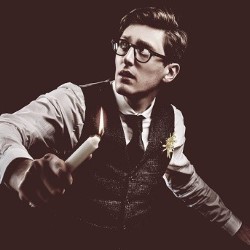 When widower Leopold Clarke is sent to investigate sinister goings on at Lopham House he has no idea of the horrors that await him. Spines will be tingled and gooses bumped in this hilariously chilling, Edwardian ghost story from the acclaimed star of the Gentlemen of Leisure, and writer for Stand Up for the Week (Channel 4) and The News Quiz (Radio 4). 'Touched with genius' (Guardian). 'Gloriously entertaining ... a highlight of my Fringe ... a smart, funny show' ***** (Scotsman). 'A delight... a comic force not to be ignored' **** (Chortle.co.uk).

It's 1910 and widower Leopold Clarke is sent to investigate sinister goings on at Lopham House with no idea of the horrors that await him. What happened to the previous occupant? Where is the eerie music coming from? Spines will be tingled and gooses bumped in this hilariously chilling, Edwardian ghost story.

Tom Neenan, one half of the critically acclaimed Gentlemen of Leisure, brings his debut solo show to Edinburgh... for those who like a thrilling fright thrown in with their laughter. Intricately scripted with quip, upon gag, upon pun, The Haunting At Lopham House evokes the short stories of Woody Allen, paying homage to The Woman In Black and cites The League of Gentlemen, Shaun Of The Dead and Chris Morris among its inspirations.

The Gentlemen of Leisure performed sell out shows at the Edinburgh Fringe and have also performed the world's first Official Comedy Tour of The British Museum. In 2012 Tom was awarded the BBC Comedy Writers' Bursary (Previous recipients include Stewart Lee, Simon Blackwell, Douglas Adams). Subsequently he has written for and script edited a large number of BBC Radio Comedy shows such as The News Quiz, the Brig Society and Newsjack.