Ian's mission to take the sting out of what is now being referred to as 'Wingategate' continues.
Preview clip 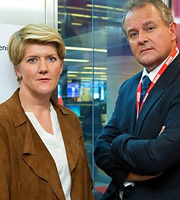 Ian's journeys north to Salford for his first big interview in the job with Jenni Murray on Woman's Hour, where he faces tough questions around the BBC's apparent ageism and sexism regarding the appointment of female presenters.

Meanwhile things are getting complicated for the Britain's Tastiest Village production team - having wooed and won Carol Vorderman as Clare Balding's replacement to co-present the show with Alan Titchmarsh (voted the world's sexiest man after George Clooney), they have discovered at the very last minute that Clare Balding is available after all (the How Big Is Your Dog dates have changed yet again).

All the confusion leads to Ian being sent mixed messages about who will actually be presenting, but it's not like he's live on Woman's Hour or anything...

The problem is that no one has told Clare that they were moving on and she unhelpfully turns up for her first production meeting at the same time as Carol Vorderman is leaving.

Siobhan is totally cool with Ian's reluctance to embrace the secrets of social media.