Ian Fletcher's salary comes under intense scrutiny in the press - why should the BBC's Head of Values be paid more than the prime minister?
Preview clips 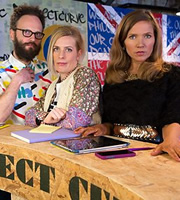 A month into his job as Head of Values and Ian Fletcher is still trying to find somewhere to sit. But there are more important issues to get to grips with - not least the director-general's desire to shape the debate as to what the BBC is really for.

Head of Output Anna Rampton already knows what it's for and in a thinly veiled move to further her own career advocates moving Songs Of Praise to radio, thus freeing up a prime slot for her own series, Britain's Tastiest Village.

The debate about the future of the BBC is not helped when Ian Fletcher's salary comes under intense scrutiny in the press - why should the BBC's Head of Values be paid more than the prime minister?

Current Controller of Current Affairs, Neil Reid, has to deal with the fallout from a blunder in the BBC News coverage of the Syrian crisis when a photo of Trudi Styler is used instead of Asma Assad.

Meanwhile, intern Will Humphries is given something important to do by the object of his desire, Izzy - a task he is keen to get right. And Producer Lucy Freeman tries to pitch Home Truth, a script she's been developing over several years with writer Dan Shepherd.

But it's Siobhan Sharpe and her team at Perfect Curve that find themselves with the biggest challenge when they are asked to refresh the BBC logo.

Ian Fletcher leads the Way Ahead team in an exercise to sum up the BBC in one word.

What if the BBC was a fruit?