Former head of output Anna Rampton has been crowned director of better. No-one on the management team is quite clear what the job entails.
Preview clips 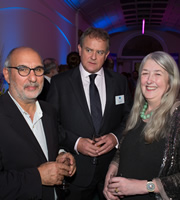 Anna Rampton has been crowned director of better. No-one on the management team is quite clear what the job entails, but one thing is certain - whatever it is, the concept of better needs to be announced to the world at large.

Tracey Pritchard, senior communications officer, suggests an event in the BBC Radio Theatre, but brand manager Siobhan Sharpe has altogether more awesome ideas - none of which involve the words 'radio' or 'theatre'.

Elsewhere, format-entertainment executive David Wilkes continues his seemingly unstoppable rise through the organisation with some surprising job news, and the BBC mega-hi-tech software programme Syncopatishare (designed to make life easier for busy executives) is proving difficult to master. Especially for ex-intern Will.

Finally, director of strategy Simon Harwood comes up with a brand new management structure for the BBC, which is essentially the old one rotated 90 degrees.

David tells Lucy about a new job that is being created in Prime Time Factuality.

Ian stumbles upon some private documents due to Will's ongoing Syncapatico induction.