A game of Management Musical Chairs starts with the advertising of a new and important role, namely the Director of Better.
Preview clips 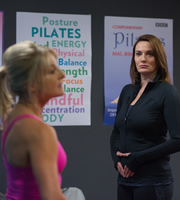 Anna Rampton, Head of Output, thinks she knows all about Better and goes for the top job armed with the latest of Entertainment Format Producer David Wilkes' ideas - Family Face Off, which experienced producer Lucy Freeman reworks into something almost broadcastable.

Top of the agenda for the Damage Limitation Team this week are rumours that Newsnight anchor Evan Davis is to be a contestant in the forthcoming series of Strictly Come Dancing - news that doesn't go down well with Current Head of News and Current Affairs, Neil Reid, who is less than happy that the main presenter of the BBC's flagship and arguably only Current Affairs programme, will be seen "anywhere near sequins".

Things get more complicated when it transpires that Brand BBC Consultant Siobhan Sharpe is behind this latest career move for Evan. It falls to Ian Fletcher, as Head of Values and arch limiter of damage, to find an elegant solution to the problem.

Meanwhile, the recently appointed PA to Head of Values and ex-Intern Will Humphries, is making life more difficult for the object of his desire, Izzy Gould, when he accidentally hijacks her computer software while showing off his newly acquired training on the BBC's foolproof software Syncapatico.

Head of Output Anna Rampton calls a meeting to reel in David Wilkes' ideas for a new show, trying to ground them more in reality than theory.

During his Syncopatico induction course, Will accidentally syncs with Izzy's computer and now she needs his password to log him out.