A national paper publishes a story on how Ian took Sally Owen, his PA at the Olympic Deliverance Commission, on holiday to Italy.
Preview clips 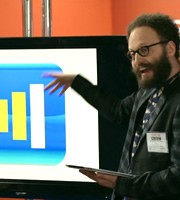 A national paper has not only published details of Ian Fletcher's salary but followed up with a story of how he took Sally Owen, his PA at the Olympic Deliverance Commission, on holiday to Italy. So the BBC can either stand by their man or get him to pre-empt potential criticism by persuading him to cut his own salary.

Meanwhile, a female Newsnight presenter has been accused of wearing clothes that are inappropriately watchable. When her legs get their own Twitter account there is a feeling something should be done about it.

Flagship series Britain's Tastiest Village has lost all three of the big name presenters who were attached to do the show - so the search continues. And brand consultant Siobhan Sharpe and her team unveil their barnstorming idea for a new BBC logo.

Losing the letters B, B and C

Siobhan and Barney present the results of Perfect Curve's re-brand of the BBC.

Elaine Pearson talks Ian through some of the advantages of cutting his current salary.