Gavin and Lorraine are as unlikely a pairing as Spam and ice cream but, with Julie on 'sick leave', they're forced to work together. 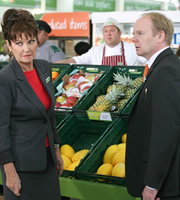 Gavin and Lorraine are as unlikely a pairing as Spam and ice cream but, with Julie on 'sick leave', they're forced to work together. It soon proves too much for Lorraine, and simmering tensions boil over onto the shop floor when she lets rip at him in front of all the customers and the Valco family. Back to being matey again, Kieran and Katie make for a much more compatible coupling, although Kieran isn't letting on about his marital problems.

A wound-up Andy is a joy to behold and, this week, winding duties fall to regular OAP shopper Vic and tall tales about his time spent in World War Two. Poor Margaret, meanwhile, is in a right fluster because her 'unlucky day' has arrived - falling at the same time every year, it never fails to trigger trouble - and you've got to feel for Colin as he oversteps the mark with Lisa by making a big gesture to suggest she's his girlfriend.