News of Leighton's sacking doesn't go down well, and it's Julie who receives the brunt of the backlash. The No Nonsense range comes in handy for a pregnant Sue. 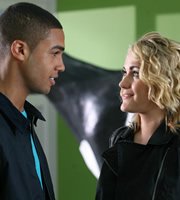 News of Leighton's sacking doesn't go down well with the rest of the staff, and it's Julie who receives the brunt of the backlash.

Gavin couldn't have picked a worse time to drop by, what with morale at an all-time low, and he's disappointed in a gutted Julie when he finds out why.

On the upside, Gavin has found a loophole that may see the triumphant return of Valco's most endearingly inept employee. In the meantime, expect hot air over heroics as an outraged Andy proposes a strike.

Katie and Kieran get their friendship back on track by arranging to have lunch together, until, that is, an appearance from one of Katie's uni pals derails it again.

After another steamy session in the loading bay, Colin wants to take his relationship with Lisa not necessarily to the next level, but to a different location by suggesting they, ahem, enjoy each other's company outside of work as well.

Plus, the No Nonsense range comes in handy for Sue when she craves a big pregnancy no-no: crab.