Gavin assures Julie that he won't make another Lorraine-shaped mistake as the search for her replacement gets under way.
Preview clip 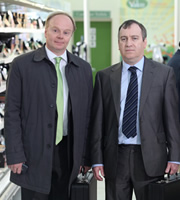 Gavin assures Julie that he won't make another Lorraine-shaped mistake as the search for her replacement gets under way.

When HR warns that he's being too picky, Valco's former manager realises that the perfect candidate is, well, him. Julie's already having a good day, solving the No Nonsense conundrum, and Gavin's unexpected news is about to make it even better.

You win some, you lose some and it looks like Andy might be abandoning the meat counter. After moaning about a job in the paper and how much he could earn elsewhere, a bluff-calling Kieran urges his boss to give them a ring. Reluctantly doing so, Andy lands an interview. Meanwhile, Katie worries about Kieran when he rows with Emma, and Lisa craves Colin's attention.

Gavin is feeling a bit flustered as they start to look for a new manager.