Gavin returns for his first scheduled visit as area manager and he's a bit miffed that nobody seems to have missed him much. Butchers Andy and Kieran, meanwhile, have fallen out; and Katie's back on the tills, which could cause a little bit of friction... 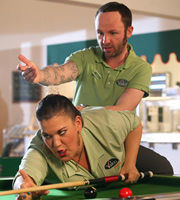 Gavin returns for his first scheduled visit as area manager and he's a bit miffed that nobody seems to have missed him much. Even Julie, who now hangs off Lorraine's every word, albeit through fear rather than unwavering loyalty. The pair soon pick up where they left off, though, and resume bonding thanks to a mutual dislike of the 'No Nonsense' range - unaware that Lorraine is in earshot. Butchers Andy and Kieran, meanwhile, have fallen out; the former feels betrayed when Kieran launches his new ticketing system without running it past him first.

Getting reacquainted with her kiosk, Katie 'enjoys' her first day at work, and welcoming her back into the Valco family is Neville, a former business executive whose career has taken an interesting turn/nosedived, and who is more than a little annoying. Pre-travels, the checkout girl could rely on banter with Kieran to break up the day, but things between them still aren't right, and they're unlikely to improve when Emma stops by and is shocked to see Katie, a turn of events that Kieran suspiciously failed to mention.