Changes abound as the supermarket sitcom begins its third series. Gavin and Julie meet the new head of strategy, a flashy upstart with big plans for Valco. 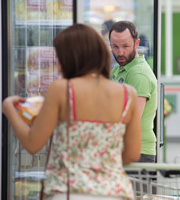 It's the hottest day of the year, so Gavin and Julie are expecting a mad rush for barbecues and beers. What they get instead is a surprise visit from head office, including the new head of strategy, Richard France.

The flashy upstart has big plans for Valco, selecting the Warrington branch as the guinea pig store for his initiative. They say power corrupts and, over on the meat counter, Andy is relishing his role as Head Butcher. Distracted by messy divorce proceedings, Kieran isn't in the mood and even the promise of a 'mate date' with Katie can't snap him out of it.

Neville, meanwhile, tries to work his charm on a couple of customers, before we're introduced to reclusive fishmonger Ray and his hapless charge, Dave.