Andy is leaving the Warrington branch of Valco for pastures new. He decides to follow his former flame, Sarah, to Scarborough. Richard, meanwhile, takes Leighton to present some ideas to head office.
Preview clip 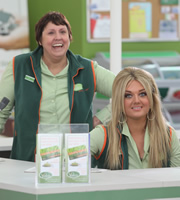 Butcher Andy is leaving the Warrington branch of Valco for pastures new. Urged on by Margaret and Katie, he takes the plunge and decides to follow his former flame, Sarah, to Scarborough. The meat counter just won't be the same, especially if Margaret, bless her, is left to run it.

It's business as usual on the shop floor as Lisa, Neville and the rest of the till workers are told to 'up their IPMs' (items per minute).

Cocky upstart France, meanwhile, finally starts to lose some of his shine, making a serious error in judgement by bringing 'ideas man' Leighton along to a meeting with Head Office.