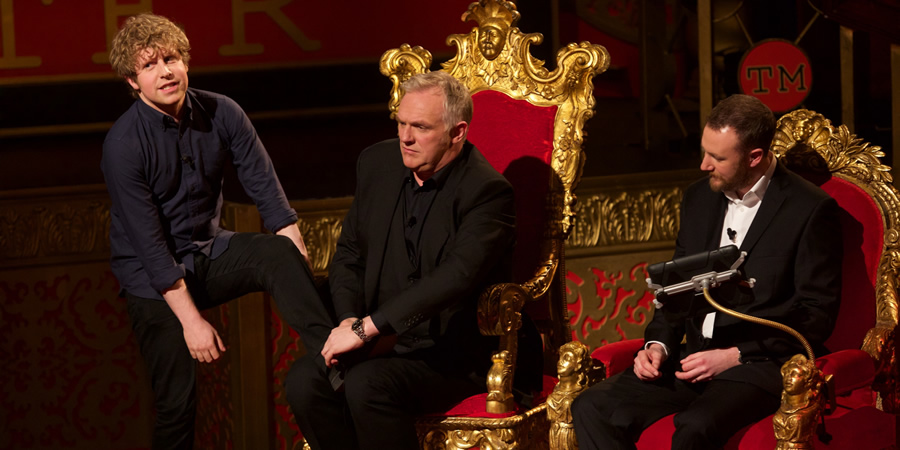 Celebs leave their dignity at the door as dastardly Mr Gilbert - aka Greg Davies - sets them some truly bizarre tasks, including building an egg tower.

* Romesh Ranganathan: His wedding ring. - 5
* Frank Skinner: His son's hobby horse. - 4
* Tim Key: A piston from the set of his Edinburgh Comedy Award-winning show. - 3
* Josh Widdicombe: I Blame the Beatles by Tom Widdicombe, a self-published book of his father's letters to the local newspaper. - 2
* Roisin Conaty: A dictionary. - 1

Task 1: Throw a teabag into a mug from the furthest distance. You have exactly one hour. Your time starts now.

Task 2: Using this device to track your route, create the best image for Taskmaster. You have one hour. Your time starts when you take your first step. Pop a balloon to signal you have finished your image.

Task 3: Buy a gift for the Taskmaster. Here is £20. You have ten weeks. Your time starts now.

Task 4: Using only the items currently on this table, get this egg as high as possible. Highest wins. The egg must not break. You have 20 minutes. Your time starts now.

Live task: Stand up after 100 seconds. Most accurate wins.