Chests are puffed with pride as Charlie joins the family business and sets off for work with Terry. Uncle Loz makes his debut at a local art exhibition as well. 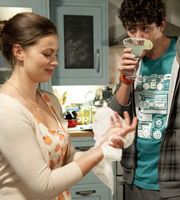 Chests are puffed with pride in the Starlings abode as Charlie joins the family electrical business and sets off for work with dad. With a chock-a-block appointments book though, Terry doesn't have time to show his daughter the tricks of the trade, unless you count how to charm the bloomers off OAP customers.

Charlie's not the only one clocking on this week; spurred on by Bell, Reuben searches for a new job, while Gravy ponders an exciting new venture.

Outside in the caravan, Fergie shows off his new piece of furniture, unaware that his find, salvaged from the garage, has special powers and is legendary among the Starlings: The Crying Chair, guaranteed to trigger a torrent of tears from anyone who dares sit on it.

The family also rally round Uncle Loz as he makes his debut at a local art exhibition. His works include 30 Days of Hurt, prints of punches thrown at a canvas every time the artist got angry during a 30-day period.