Fergie finds himself behind bars and a panicked Jan prepares for book club. Meanwhile, Grandad gets ready and sets off for a very important date. 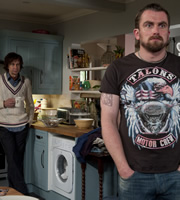 Poor Fergie is in a right pickle. While stuck in traffic on Charlie's school run, he tries an alternative-cum-illegal route that attracts the attention of the police. Throw in some surprise court summons and speeding charges and Fergie finds himself behind bars. At least he's got company, in the form of an especially angry chap he has something - or someone - in common with.

An impromptu (and awkward) reunion awaits Lodz when his younger brother Lee shows up. He wants Lodz to watch him fight at an event called 'Nottingham Knuckles', but, first, they've got some issues to iron out.

It's almost seven o'clock and, for Jan, that means one stomach-sinking thing: book club. Taking the fun out of reading, her fellow members are more interested in being snotty and practising their passive-aggressive digs.

Failing to finish the selected tome hasn't done Jan any favours either. Hubby Terry is also watching the clock because the pub quiz looms and, with it, a fresh opportunity to take down arch nemesis Brian Valentine.

This week's episode belongs to Grandad, though. Donning his dapper suit and with potted plant in hand he sets off for a very important date.