Terry and Jan celebrate their anniversary and, for once, they've got the place to themselves. For Fergie, Lodz and co, though, a disastrous camping trip awaits. 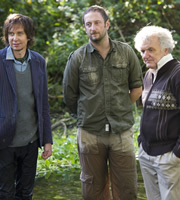 Everyone has temporarily flown the nest, meaning Terry and Jan have the place to themselves for the weekend. It's just as well considering it's their anniversary, and poor Terry has pulled out all the stops to woo his wife, but, aside from a nice sprinkling of rose petals, nothing is going quite right, not the personal chef or the candlelit bath.

Terry's understandable frown is turned upside down, however, when Jan unveils her plans for their special day (involving the rediscovery of their Gravy-conceiving rug).

Where are the rest of the Starlings? Fergie, Loz, Grandad, Gravy and Charlie have decided to give 'wild camping' a go, and are deep in a forest in the middle of nowhere.

The trip is a disaster from start to finish, thanks to sprained ankles, poor bearings, half-men/half-kestrels, not to mention Grandad forgetting to record Antiques Roadshow.

They'd happily trade places with Reuben and Bell at a luxury spa, where the former is hoping a few massages will finally mend their relationship. All is going swimmingly until "Bono" turns up...