Brendan Coyle and Lesley Sharp star in this heart-warming comedy drama. The Starling family make way for a new addition to their already-hectic nest. 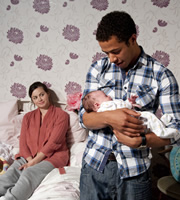 The Starlings are a normal brood getting on with life in Matlock, Derbyshire, tackling obstacles as and when they come, and they've got a fair few in this first episode.

Terry and Jan have just moved Grandad into their already-crammed home - following an unspecified incident at the retirement home - to share with none-too-pleased teen Charlie, and now they're preparing for one more arrival. It's only small and due any minute as daughter Bell goes into labour via a birthing pool in the living room.

Then there's Grandad's illegitimate son and, erm, interesting artist Loz, Jan's nephew and returning traveller Fergi out in the caravan and Bell's ex-boyfriend Reuben, who's determined to make things right and get Bell back.

Throw in Terry's suspicious phone calls and oddball son Gravy losing one of his friends of the "four-legged and four-armed" variety, and it's fair to say that our weekly visits to the Starlings nest are going to be pretty eventful.