The cockles-warming comedy flies the nest. Grandad receives a fleeting visit from his best mate, and Terry steps in to bring Bell and Reuben back together. 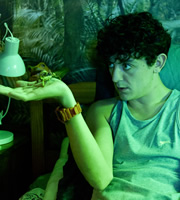 Grandad's best mate Alf is over from Australia and, after 35 years apart, the pair are long overdue a catch-up. Their trip down memory lane is cut short, however, when, mid-conversation, Alf pops his clogs, passing away in the Starlings' garden. The death hits Grandad hard and, learning more about his pal's life in Oz, he's determined to give Alf the send-off he deserves. For the rest of the shocked brood, it spurs them on to seize the day and make some big decisions.

And is a new beginning on the horizon for Bell and Reuben? The pair couldn't be further apart, with the latter trying (and failing) to move on with a new girl, Lou Lou, who refers to him as Reubles... Step in Terry, who takes matters into his own hands and utilises the healing powers of McFly to bring the couple back together.

It's not looking good for Loz and Fergie, though. While enjoying a free drawing class, in which a starkers Fergie is posing, he drops the bombshell that he is playing "departure board bingo" and going on his travels again. To say Loz is crestfallen is an understatement.