Jan takes a brief reprieve from the chaos of domesticity to embrace her inner author for a short story competition in Derbyshire Life. However, Grandad is acting more strangely than usual. 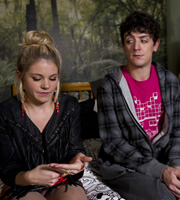 Jan takes a brief reprieve from the chaos of domesticity to embrace her inner author for a short story competition in Derbyshire Life. That's the idea, anyway, but every time she puts pen to paper, she's interrupted by the many members of her brood.

One such pest is Grandad, who's acting more strangely than usual. Maybe it's because he doubled up on his arthritis tablets, although it can't have helped being nipped by one of Gravy's eight-legged friends, especially when his grandson ominously intones that there's "a 50/50 chance that you're going to hallucinate - badly".

It's proving to be a trying day for the Starling women, what with Bell returning to work for the first time since Zac arrived. Her nerves aren't helped by the glamour-free nature of the photoshoot (Vogue front cover this is not), or he fact that the guy she's been paired with is a professional model-cum-prat.

Uncle Loz, on the other hand, is on the search for a new place and, with Fergie in tow, heads off to his recommended "digs", a niche house share for Buddhists.

The most momentous piece of news, though, is that Gravy has bagged himself a girlfriend, and a surprisingly normal one at that.