Jan reminds Terry of a promise he made years ago about getting the "snippity-snip" once the kids were older, and, though normally a man of his word, this is one deal he might want to back out of. 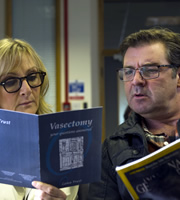 A more pressing concern waits, however, when, during a shopping trip, Terry meets tutor Stephen for the first time.

Plus, Fergie tags along with Loz on a staff night out and discovers he's already crossed paths with headteacher Judith, and Gravy has an epiphany regarding his going-nowhere job at Peak-a-Boo.

A sweet, dewy-eyed scene between Charlie and Grandad, both of whom have been bottling up their feelings recently, is saved for the episode's end.