Series 3, Episode 6 - Kiss For The Camera

Jamie attempts to split up with Isabel, but it's not as easy as he'd hoped. Meanwhile, Janet is feeling depressed about the divorce and Alan's put through the wringer by Sally's teenage son. Sandra's sister, Evelyn, offers her and Keith financial assistance.
Preview clip 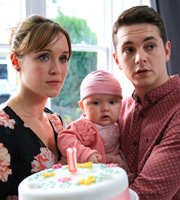 Jamie has realised he can't string Isabel along anymore and tries to find a way to end their relationship, but she's not taking no for an answer.

Laura tries to move on with her life, applying for university courses and planning Emily's first birthday party. But Janet, depressed about the divorce, is dragging down the party mood.

Sandra's sister Evelyn offers to help Sandra out financially. Sandra sees it as a way to get out of the caravan site, but it becomes clear that Evelyn will be attaching conditions. Keith's love affair with the caravan park begins to wane.

Alan is still dating his divorce lawyer Sally, who has invited him to meet her teenage son Luke. Damaged by his mother's negligent parenting and endless dating, Luke puts Alan through the wringer.

Sandra gets a surprise visit from her sister Evelyn, Keith's no.1 fan.