Jamie is turning 18 and Mike has taken over organising the party. His main mission is to source some high-quality, mind-altering substances.
Preview clips 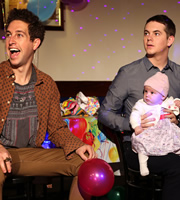 Jamie is turning 18 and Mike has taken over organising the party. His main mission is to source some high-quality, mind-altering substances. Mike decides to go organic and get hold of some mushrooms. Beth comes on the hunt and steers him towards a harmless non-psychedelic type.

Laura is torn between going to a 'real' party with Danielle, or showing up at Jamie's 18th. In the end, she decides to give Jamie a chance. But when she turns up and finds him apparently off his head with his mates, she's furious.

Meanwhile, Keith has been forced to take a new-age influenced 'back to work' course. He goes on an accelerated journey of self-discovery. He's getting fitter, and closer to the eternal truths of the universe but he's no closer to getting a job.

Keith attends a 'Job Positive' session and finds out why 'Work' is a four letter word...