Jamie & Laura are finally a couple, but Laura is already having cold feet. Meanwhile Beth and Mike are trying to deal with the aftermath of their night together. Sandra and Keith are facing eviction, and Alan and Janet are talking divorce.
Preview clips 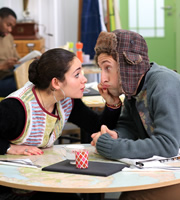 Jamie & Laura are finally a couple, but Laura is already having commitment issues. She's also caught in the cross fire of her parents' impending divorce. Janet's still in NY, and Alan has put the family home up for sale.

Jamie is having domestic problems too; Sandra and Keith have fallen behind with their mortgage payments and are being evicted. When they are forced to move into a static caravan park, Jamie decides to drop out of school and get a job to provide for his family.

Meanwhile, Mike and Beth are acting awkwardly with each other after their night together. Mike wants to 'hook up' again and is desperate to tell Jamie he's finally lost his virginity, but a mortified Beth wishes it had never happened and swears Mike to secrecy.