Series 1, Episode 5 - Knocked Up And Homeless

Laura is settling in well at Jamie's place - a bit too well. Keith is sick of her being there, Jamie is tired of sleeping on the sofa and Mike and Beth have had enough of not being able to see their mate. Something's got to give, but the eventual confrontation kicks off a much bigger crisis.
Preview clips 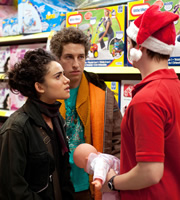 With three months to go, Laura is still living at Jamie's house and the pressure is starting to show.

Keith is sick of being locked out of the bathroom all the time. Jamie is exhausted trying to hold down a job while sleeping on the living room sofa. And, despite the benefits of Laura's obsessive cleaning, even Sandra is starting to wonder when she will actually leave.

﻿Meanwhile, Alan and Janet have decided to make a go of their marriage. They return to counselling and, on their therapists advice, start dating again with a weekend away. But their choice of venue turns out to be less than perfect.

Beth and Mike are also feeling the effects of Laura moving in. They feel Jamie is neglecting their friendship now this girl is taking over. When they confront Jamie, irritation spills into an argument, sending an emotional Laura into false labour.

Laura was feeling really settled at Jamie's house, but after some cross words with Mike and Beth and an unhelpful conversation with her mother Janet, Laura is a bit lost.

Janet and Alan get away for the weekend to reconnect. After a satnav related delay, they both just want to check-in and get some lunch, if only everything were that simple...

This week, Mike tries to get friendly with Danielle but is brutally rebuffed. Laura continues to glow and get more confused, while Jamie tracks down the source of the smell in his bedroom.