Laura is attempting to widen her circle of friends, but she finds it hard to find a peer group. Meanwhile, Beth is confused when she falls for a boy seemingly her opposite, and Alan and Keith strike up an unlikely friendship.
Preview clips 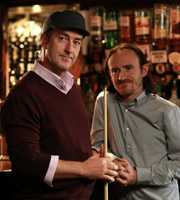 Laura is attempting to widen her circle of friends, but she finds it hard to find a peer group - the pramface mums in the park are more interested in nicking her phone, and the competitive yummy mummies just want to patronise and score points off her.

Beth is confused when she finds herself attracted to a posh boy with views politically opposed to her own. In the absence of real girl friends, she is forced to turn to Jamie and Mike for guidance.

Meanwhile, a lonely Alan employs Keith, to be his driver. After a shaky start, the two strike up an unlikely friendship. But it's not long before this is tested as Alan's snooker skills land them in the middle of a pub brawl.

Beth is having boy trouble and turns to Jamie and Mike for relationship advice.

Laura and the Yummy Mummies

Laura has made some new 'yummy mummy' friends who want to know all about Emily's daddy over coffee...