At eight and half months, Laura is in the final stages of pregnancy. She's also stuck at home and really bored.
Preview clips 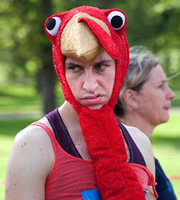 At eight and half months, Laura is in the final stages of pregnancy. She's also stuck at home and really bored. With Laura's parents lost in their rekindled love, and best friend Danielle otherwise engaged, Laura gets Jamie to take her on a shopping trip.

Meanwhile Mike has decided to get a professional in to help him lose his virginity. He's raising money for a prostitute by pretending to do a fun run. Beth has innocently been helping with the fundraising, but when she discovers where the money is actually going, she's furious.

Meanwhile, Keith is taking Sandra on a trip to the Lakes, hoping the beautiful landscape will soften the blow when he breaks the news to her that he's packed in his job.

When Laura's waters break in the middle of the shopping centre, panic sets in. Jamie, Laura's only apparent support, is not really rising to the occasion. In fact, he can't even remember where he parked the car.

As labour takes hold, Jamie has to grow up pretty quickly as this chapter of their lives comes to an end and parenthood beckons.

Mike's faking a charity run to raise money to pay for a personal project. Although Jamie doesn't support his plan, he is impressed with how far the money will go.

Beth has been collecting cash for Mike's charity run. After finding out that it is going towards a prostitute, she is less than impressed...

Beth forces Mike to change his charity fun run plans. Meanwhile, Jamie and Laura go shopping and end up coming home with more than a pair of maternity jeans...